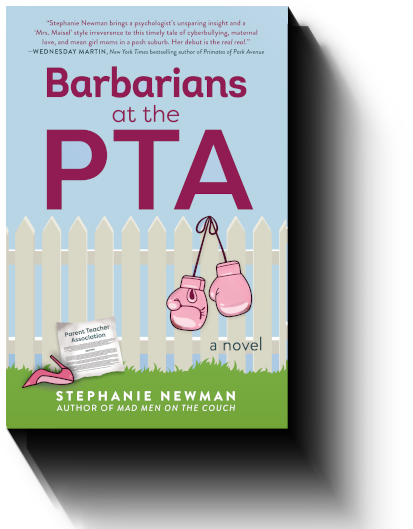 Amazon Bestseller in categories of parenting girls and clinical psychology

Top 25 June Read
― Bustle.com
A sharp, hilarious read you won’t be able to put down!
― Star
Dr. Stephanie Newman takes a fresh approach…. it’s always satisfying to see bullies get their comeuppance, and for that payoff, it’s definitely worth taking on these Barbarians.
― Chick Lit Central
(a) funny, knowing, and caring tale.
― Booklist
Stephanie Newman brings a psychologist’s unsparing insight and a ‘Mrs. Maisel’ style irreverence to this timely tale of cyberbullying, maternal love, and mean girl moms in a posh suburb. Her debut is the real real.
― Wednesday Martin, Ph.D., New York Times bestselling author of Primates of Park Ave.
Stephanie Newman’s well-paced, splendid debut explores the complicated and heart-breaking challenges of fitting in … at any age.
― Christina Kelly, author of Good Karma
Suburban life is seemingly perky, but in truth it can be dark and unforgiving. It’s a place where one can feel alone and utterly judged. In Barbarians at the PTA, Newman exposes the exclusivity and vindictiveness of ‘perfect’ suburban life. A must-read!
― Lybi Ma, Psychology Today
Dr. Newman has expertly blended a page-turning beach read and anti-bullying campaign into the perfect debut novel. Smart and sassy, sensitive and insightful, Barbarians at the PTA showcases the shallowness and wrath that can manipulate popularity and behavior and highlights the fact that some mean kids are raised by meaner ‘role models.’
― Dr. Nancy Berk, Entertainment Insights, author of College Bound and Gagged, and podcast host/producer of Entertaining Insights
Mommy drama for intellectuals and a fast read. The writing is crisp and clear, and Stephanie covers so many important topics -therapy, cyber bullying -in a relatable, readable voice.
― Ashley Gurbal Kritzer, Senior Reporter, Tampa Bay, FL
Fast moving novel. I look forward to the movie.
― Bookloons

Stephanie Newman IN CONVERSATION on Authors on the Air

Desperate Housewives meets Mean Girls in this heartfelt and hilarious debut novel about a mother-daughter duo facing cliques, cyberbullying, and snobs in a wealthy NYC suburb.

Victoria Bryant is starting over. After a rage-inducing scandal and the realization that her dreamy fiancé is faker than a faux Fendi purse, she moves her psychology practice and 10-year-old daughter, Rachel, to Mayfair Close, an idyllic Westchester, NY, suburb known for its manicured lawns and excellent schools.

The transition is initially seamless; several PTA moms befriend Victoria, her already busy practice booms, and Rachel finds a group of friends. But before anyone can say “helicopter mom,” in walks Lee DeVry. Wealthy, glamorous and perfectly toned, the PTA president is everything Victoria is not.

Vic tries to fit in with Lee and the other SUV driving, athleisure-wearing mothers. At first, she manages to balance the demands of her practice, single parenthood, and her budding romance with Jim, a handsome school administrator. All seems well until Rachel is suddenly targeted, first by the girls at school, and then by an anonymous cyberbully. As Rachel spirals, becoming isolated, playing hooky, and exhibiting signs of depression and disordered eating, Victoria vows to find out who has been messing with her daughter.

After she learns a secret that will help her rescue her child, Vic faces the ultimate dilemma: should she expose the bully publicly, despite the potential consequences to her professional reputation and relationships with Rachel and Jim?

A hilarious, sharp, and hope-filled debut, Barbarians at the PTA will have you cheering for badass moms everywhere who go to the ends of the earth for their children.